During the 1950's, the Manheim Township Police Station was located at 100 Buch Avenue. The Police Department consisted of one full time Chief, three officers and one police car. In 1957, a second police car was placed into service. The police cars originally had no radio equipment in them until 1957, when mobile radio telephones were installed in the cars and citizens called the police directly in the police cars, paying thirty cents for each telephone call made. 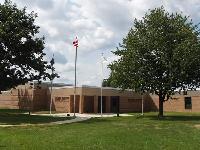 In 1960, the Township moved its Municipal Building and the Police Station to a large home at 1500 Lititz Pike. It was purchased at a public auction and the two car garage was converted into a police station with three offices and a cell room.

In 1973, a new Municipal Building with the Police Station included was constructed on Municipal Drive. The total building area was 11,212 square feet. There were 23 sworn officers and 2 civilian employees.

In 1985, an addition was completed which almost doubled the police station portion of the building from its original size of 4,262 square feet. There were 33 sworn officers and 9 civilian employees.

In 1990, the Township Municipal Offices moved from the original building into its own building across the street, giving the police additional space. There were 43 sworn officers and 13 civilian employees.

Today, after another addition and renovations to some portions of the original building, the square footage of the police station increased to 22,500 square feet from 4,262 square feet. The department consist of 64 full-time sworn officers, which includes Patrol Officers, Detectives, a K9 unit, Bicycle Officers, and School Resource Officers. The department also employees 18 full and part-time civilians, who are responsible for administrative duties and uniformed assistance with minor police functions.